The Dingonek is a creature of legend all the way from Africa. Reports have ranged from all over Africa but are primarily heard of in the areas of the Congolese Jungles. The first written account comes from jungle explorer Edgar Beecher Bronson’s memoirs “In Closed Territory” written in 1910. In this account Edgar tells about his friend John Alfred Jordan who had an encounter with the Dingonek even going so far as to shoot at it. This effort was noted to only have angered the ferocious creature.

Sometimes referred to as the “jungle walrus” the Dingonek is reported to have long tusks or fangs  that protrude from its upper jaw, much like those of the sabretooth. The Dingonek has a lion like head and is reported to have armored scales like an armadillo. Some claim the Dingonek has a large fish like tail while others say it has a scorpion tail. The creature’s feet are webbed and clawed to enable both swimming and land movement. The Dingonek is said to be somewhere between 12 and 18 feet long. He is also considered a formidable hunter and can take on anything smaller than an elephant to sate his monstrous appetite.

In the World of Ekunbi

Even in the world of Ekunbi, the Dingonek is a rare and very dangerous predator. They originated in the Swamps & Boglands Territory, a southeastern territory of Ekunbi. This Territory is considered one of the most dangerous in all of the country.
In my current series, the Dingonek species from the Democratic Republic of the Congo plays a critical role both as an intimidating force and as a formidable ally. Oz the Dingonek is the mentor to Lionell Ekele a young man who was born in the Republic of the Congo and moved with his family to the city of New Orleans. When Lionell goes to Ekunbi, Oz is the one in charge of teaching him how to become a soldier of legendary proportions. Lionell and our heroine Reagan, initially get off to a rocky start, but when your back is against a wall, you can’t be picky about your potential allies.

I am working on more articles about legendary creatures and the world of Ekunbi. Check back for more soon! 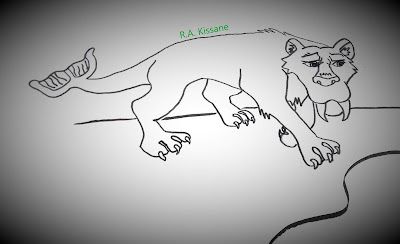